In which Allegiant and I have a heart to heart, attempt to heal those wounds and hug it out. 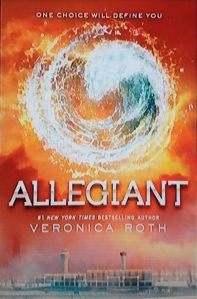 You broke my heart, and not in a satisfying “I need my blankie and some ice cream” way…You sent me into an absolute tailspin searching for another story to heal the wounds you inflicted and restore my faith in trilogies. I read you 2.5x anyway and even purchase you as a kindle gift for my sister when her copy took FOREVER to come in the mail!

When it was over I tried to fix the emptiness by going back and reading the whole series just to see if I was missing something….I wasn’t. Well, actually I was…I missed the beautiful, clean, unique, well thought out story you told me in Divergent. I missed the world you created and the rules and parameters you set for that world.

Allegiant… I am still working on forgiveness over here…

Maybe, maybe once we have this chat I can finally stop passively aggressively mentioning you in every other blog and I will be able to move on, remember the love I had for Divergent and appreciate the series as a whole.

Ok then… lets DO THIS!!! (Warning…Spoilers abound!)

I think it’s a pity that such a HUGE ginormous deal was made over Tris’s demise (more on that later) because in my opinion it’s not what killed the story (tasteless pun intended).

While it may be true that Veronica Roth received death threats via the twitterverse or whatever, which is obviously unacceptable and downright silly, I think it’s important to consider that the offenders were by and large very young, emotionally charged readers. Sadly the response to those readers that I saw was to (rather viciously) chastise them (also via twitter) and to staunchly defend Roth’s choices.

I believe a better response (the one that would have honored the spirit of Divergent) would have been to use the opportunity to have a heartfelt discussion about social media and cyber bullying.

It also would have been a great opportunity to discuss the deep connections we formed with Roth’s characters and to question the reason some of us felt unsatisfied and others downright angry.

*Was it truly Tris’s death?

*Perhaps it was HOW she died?

*Did the dueling voices leave us feeling like we missed out on connecting with Tris?

Sadly, a lot of those conversations were lost amidst the hoopla in the aftermath of Allegiant. It seemed that the only thing that was addressed was Roth’s choice (and defense of that choice) to kill her main character.

With that said, lets have some of those conversations:

First off: Allegiant deviated from Divergent and Insurgent by telling the story from both Tris and Tobias’s POV. Lots of people hated this…I didn’t particularly mind. Tris and Tobias did have a very similar voice and I can see why that might bug some readers on the other hand Tris and Tobias ARE very similar…they both have that Abnegation stoicism and Dauntless fire, it’s why we love them together! Also, by the end of the book it is evident that it has become Tobias’s story and since it’s important that we care about his future, I’m glad we got to know him.

I KNEW it wasn’t going to be sunshine and roses for her as soon as I saw that the book was split into two voices… Honestly in my initial reading this suspicion was so distracting that I blew through the book and didn’t shed a single tear when she died.

Quite frankly, I’m not sure I would have cried even if I hadn’t seen it coming a mile away… I hate, hate, HATED her death scene…Just hated it. UGH!!!

I love Tris. She is totally on the list of characters I pretend to be when I’m running like the devil to songs about the apocalypse on the treadmill…You guys do that too right?? (Badass heroines are EXCELENT running motivation).

Anyway, I felt like her death scene was rushed and empty… I read it over and over trying to figure out what was actually going on and I still can’t really picture it! It was kind of a mess.

And then there was the WHY of it…I read Roth’s blog about why… I think it managed to frustrate me even more. Sadly, I don’t think the lessons in selflessness and growth she was trying to teach were accomplished.

For me, Tris’s death was difficult to swallow because I did not see the necessity in it from a story telling perspective and because of that her death simply did not carry the gravity it should have. Sure she “sacrificed” herself for Caleb…but she survived the serum…to up and DIE seconds later at the hands of a poorly developed character with a gun was just….odd…and disappointing. While I believe Roth when she says she wasn’t going for “shock value” I wonder if she was worried that if she didn’t kill Tris then she wouldn’t be making the “brave” choice….?

Lets be clear, I am not against killing the hero. Truly I’m not. In fact while reading the Hunger Games trilogy I was fairly convinced Katniss might die… and while I would have been sad… I would have understood the why of it. Her story (unlike Tris’s) felt like it had been told. Katniss would have left behind a better world that had already begun to move on without her. Collins, however, decided to spare her broken life and show us that sometimes we have to pick ourselves up off the floor and move forward into the future with wounds that won’t ever heal.

Now I hear you saying, ” But Tobias had to do that too!!” This is true.

In fact, his final chapters are what saved the book for me.

I think Roth handled Tobias’s grief very well. It was moving, beautiful and real, a tear or two may even have escaped my ocular cavity. I was downright moved when he almost took the memory serum and SO glad Roth sent in Christina to save him. (I love Christina) My favorite line in the whole book might have been “I can be your friend in the meantime. We can even exchange friendship bracelets like the Amity girls used to“.

Despite questioning the choice to kill Tris I’m glad Roth did not choose to kill Four. He was just too broken. Tris, for all her trauma and loss was always “whole”. Tobias on the other hand was clearly in need of many years of life to heal from his past. He began that process with Tris and the epilogue let us know that even without her he continued to grow.  Sadly, in the world Roth created I am not sure a character like Tobias would ever fall in love again (poor boy may only have sex that one time).

Speaking of sex…. First off, why don’t YA books ever use the actual word SEX?? Is it a rating thing? It’s quite odd really.  ANYWAY was the sex scene super duper weird? WHAT was that analogy about the knife and the whetstone about? And was anyone else really annoyed that they spent the whole book having the same argument from Insurgent (even after pinky swearing that the wouldn’t) and when they finally make up…they go ahead and lose their virginity and not twenty four hours later Tris runs off and DIES…What are teenagers supposed to make of that?  Sex will kill you??

Ok I’m sure no one thinks that but seriously!!  I would have preferred it if Tris and Tobias had made the move to intimacy much earlier in the book (so that I wouldnt have mentally connected it with her death) or not at all. Was it really that important? If it WAS than perhaps it could have been handled with a bit more care….as it was it felt like a slightly awkward afterthought.

And about that merry go round fighting…*Sigh* you know, it’s true that lots of couples end up having the same three fights for the better part of fifty years (Why don’t you put dirty dishes in the sink instead of on the counter??…Cuz the sink is ICKY there are GERMS in there! Why do you let our ginormous dog eat the furniture?) …it’s just part of life. Regardless. Tris and Tobias didn’t have fifty years and even if they had I still wouldn’t have wanted to read about it. They kept telling my they loved each other…I wanted to SEE it. I wanted them to step outside of their own emotional trauma and take the other persons feelings into account! They were raised ABNIGATION for heavens sake!! It could have happened at least a little more… maybe there could have been one less super secret meeting and a little more love?!

And then the was the biogenetic sciency stuff… Guys, Im no geneticist. But the whole GD vs GP damaged and healed genes felt messy to me. I didn’t love it. I kept thinking about genetic linkage, and DNA coding and blahblahblah I’m not gonna  get into it… I’ll just tell you that I almost didn’t get this post out because I kept getting distracted reading stuff like this. and this. and this when I was trying to figure out what bugged me so much. Of course the point Roth was trying to make is that who we are is obviously much more than our genetic code… So I should probably let it go.

I bet you think I don’t like you??? Thats not true. I DO! I do like you… I read you twice and you better believe that someday I’ll read you again.  You just weren’t what I was expecting…or more accurately what I had come to expect from V. Roth. Maybe you weren’t as clean and precise as your older sisters, maybe you were a little confusing…but you were still pretty beautiful. Really… you were. I just needed to learn to accept you for who you are and not who I wanted you to be.

Perhaps…perhaps.. you don’t deserve all the shade I’ve been throwing your way.

So maybe we can put this whole mess behind us and forge ahead into a sparkly hollywood  (YES OF COURSE I HAVE MY DIVERGENT TICKETS ALREADY) future? 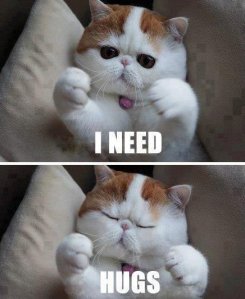 What did YOU think of Allegiant? Did you struggle with it like I did?? Or was it the perfect ending to your Divergent experience?? If so I’d LOVE to hear why…maybe it’ll help me along in the healing process 🙂

9 Responses to In which Allegiant and I have a heart to heart, attempt to heal those wounds and hug it out.

where YA books are reviewed

Memoir of a Writer

getting high on books and other narratives

Of Books, Photography, and Tea

It is all about the books!

Formerly Every Book You Need to Read and More

Let's read and talk about it!