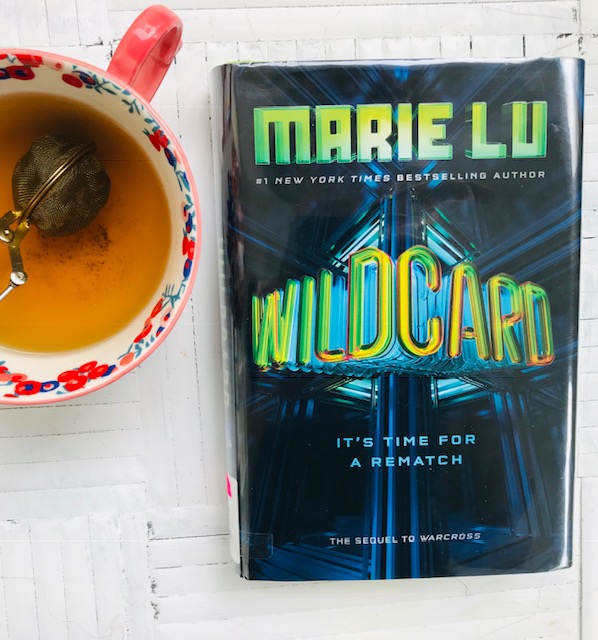 Can I be honest? I’m going to be honest..

I did not love Warcross. I think I liked it, it was fine. I read it months ago and I don’t completely remember the details of my bookish feelings but I think I enjoyed it as a quick day-off read that pulled zero (lol) emotions from my eternally haggard soul. In fact my deep dark secret is that despite being a person who essentially started blogging out of desperation to talk to other book people about Marie Lu’s Legend series  (kinda seriously) I haven’t actually  truly clicked with any of her books since Champion.

Until today, I loved Wildcard. Loved it. It honestly felt a bit like coming home.

For me, I think that having the plot and relationships presented in Warcross be a bit faded in my memory helped me jump in. I sort of remember not caring about anyone all that much. Emika was a fun heroine and I enjoyed the Riders, but Hideo??? No. He felt empty and unlikable to me and I don’t think I bought into their  relationship. Somehow though, ten pages into Wildcard I cared about everyone and everything. Apparently, a bit of time and only a vague memory of the previous book was exactly what I needed. But actually it was probably because the stakes felt high and because Emika cared and I believed and connected with her voice in a way I hadn’t before. For whatever reason that allowed the character of Hideo to be fleshed out and emotionally balanced in a way that it hadn’t been before so by the time we dug further into his story arc I was fully invested both in hope for his redemption but also for a future for the Emika/Hideo ship.

The other thing that perhaps helped me here was that the book seemed overall much more character driven and less world building and game playing. I have seen others express disappointment that more time was not spent in the game but for me that probably contributed to my preference for this book. I LOVE science and science fiction  but I am not a gamer. I’m actually a weeeeennny bit tech challenged. So while I truly enjoy the overall concept of the neurolink and the Warcross game the actual gaming sequences sort of ends op feeling like a car chase scene to me (which is always where I check out in a movie).

Ultimately this story was truly about a lot of big concepts that are knocking at our proverbial door, and I love Lu for tackling those things. What I love even more is that the solutions aren’t obvious or clear, because they aren’t really! Science and technology have always had the power to save and destroy us and to do both simultaneously.

So I think we all knew who Zero was like 10 min after he showed up in Warcross right? That knowledge didn’t particularly bother me but I was certainly not surprised by the revelation. What DID surprise me was the sum total of the REST of Zero/Sasuke’s story! Holy hell! To say I loved the way that was crafted would be an understatement. I loved the duality of the character and the many ways his existence highlighted a moral tightrope that we all may walk someday soon. And I loved his backstory and how, praise be, it gave way to an AMAZING and emotionally complex route for Hideo to progress in his own story (something I think was missing in Warcross for me). For now though let me tell you the two things topics really chilled me.

So about Hideo, I already mentioned that he wasn’t my favorite in Warcross so let me tell you what I loved about him in Wildcard. I loved the questioning! I loved that he was stubborn and blind to his obviously evil-mindcontrolling-overlord ways buuutt not really. He didn’t want to see the flaw, he didn’t want to think he had ulterior motives, but he did. And you could see right away that the pretty lies he had told  himself were crumbling. Which left him with a truth about himself, the truth being that he was willing to sacrifice his humanity and the free will of billions to find his brother. Obviously this probably isn’t morally sound. But I can at least understand it and empathize. It makes him deeply flawed and deeply human which filled in his character nicely. I also loved that it wasn’t completely Emika who guided Hideo to the huge and glaring error of his ways. Rather it was Susuke in the last bits of the story who was able to break down the walls, which made a lovely amount of narrative sense since he was the reason they existed. And I won’t lie, I have shed maybe two tears in my whole life over books (1 was Harry Potter 7 and the other was in middle school and I don’t remember the book) but the reunion scene between Hideo and Sasuke almost did it for me, beautiful!

As for Emika and Hideo, I liked that this relationship was not left hanging. If I didn’t care about it at all in Wildcard I was firmly shipping them by the end of Wascross and I thought the resolution was natural. I believed that they had found a truth in each other and that they could evoke into people who built each other into the best versions of themselves.

So ultimately, I really enjoyed this book, it struck a lot of cords with me. And these days with so little time to squeeze in books it makes me truly happy when I fall in love with a book (I have actually become a person who DNFs books on the regular, which has never happened before!!).  Time just seems to be running through my fingers lately for many reasons. Perhaps that’s why this sentiment struck me through the heart.

“At the end, we’d all wish for the same thing. Just a little more time.”

P.S The tea in the pic is a Tupelo brand green tea/mint Mmmmmmmmmmmmmmmm.

where YA books are reviewed

Memoir Of A Writer

getting high on books and other narratives

Of Books, Photography, and Tea

It is all about the books!

Formerly Every Book You Need to Read and More

Let's read and talk about it!